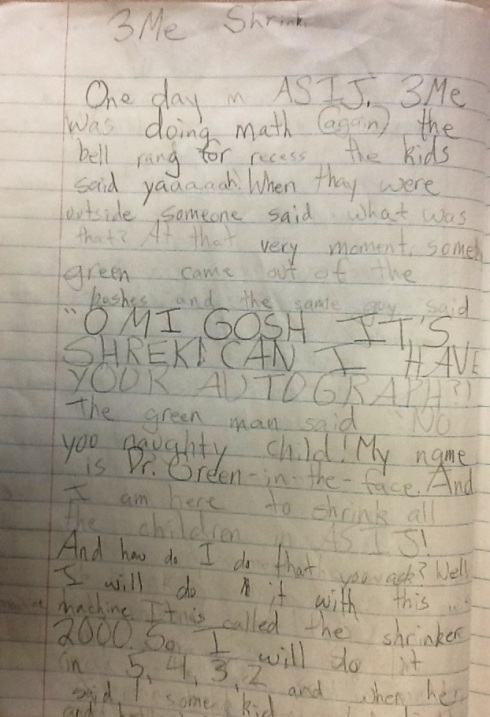 Lately I’ve been ruminating on sharing, the part of the workshop where students gather together to listen, enjoy and respond to each other’s writing. For a long time, the share was the piece of my writing workshop that dropped by the wayside due to time constraints. I’d glance across the room and notice all my students involved in meaningful work and I’d decide to forego the sharing component of the workshop. Sharing occurred in pockets or spurts but it wasn’t something the kids could rely on.

Then one year, I decided to focus on the share factor for my professional learning goal. When I began to look at sharing with consistency under the classroom microscope, interesting patterns started to emerge that I hadn’t noticed before. One of the first things I caught was that more often than not, the students who wanted to post up regularly in the share weren’t always my strongest writers in a pencil paper way; they tended to be, however, the most effective communicators—kids who enjoyed telling a story under the spotlight. These writers were also kids with a good sense of humor and a good ear for language. They delivered dialogue in a crisp original way even though they couldn’t punctuate it accurately to save their lives. I suspect many of these kids actually think in dialogue sound bites and that it is the sound of voices that shape their character development and their plots. These writers gave the share momentum; their strong voices helped me grow a culture in which sharing our written work was a part of how business occurred in the workshop.

Never underestimate the entertainment factor in learning; once the writing workshop share was associated with a consistent dose of humor, drama and suspense, the share became the part of the workshop that kids anticipated and looked forward to the most. I did a short series of mini-lessons on expectations for the share: What’s the role of the listener? What’s the role of the writer? How do we, as audience “readers,” respond to writing in progress? How can we as a community of writers support each other on our quests to improve? Effective sharing requires some clear expectations for student behavior. Listeners must be focused and thoughtful. Genuine compliments need to be generated. The teacher’s voice must only be one voice among many. When these ingredients fall together in the bowl, I’ve come to think that the writing workshop share might be the most powerful tool I have in the classroom for transforming student writers and their writing.

What do I mean exactly? Let me try to flesh out my thinking with a few examples. As teachers we always talk about the power of mentor texts and I agree, they certainly can have an impact on a writer. However, I’ve come to recognize the equal power of a student mentor text; a student who generates a piece of work that resonates with other students and opens up all sorts of possibilities.  Kyle came into school a math whiz and by all leaps of his own imagination, he was already hammering himself into an engineering mold. Hidden beneath the pocket protector and the calculator, however, was a knack for creative storytelling. He took the writing workshop share by storm with his initial piece about our classroom and their encounter at school with an alien. He made all of the students in our class relevant characters in his fictional world. His peers loved it, he was an instant cult classic, and suddenly I had a classroom full of students generating stories about classroom adventures; students who stumbled for ideas could hook onto this student generated model and script successful pieces. Kyle, being a generous writer, encouraged this rip-off as he went on to send the class to Hollywood and mash it up with Barbie and Ken, Elmo, Katie Perry and other characters from Hollywood Boulevard.

Another student in my class physically couldn’t generate any writing at all and yet through his voice in the writing workshop share, he became a writer. In the beginning of the year he would hold the paper in front of him with barely a line written down, and he’d read a story that he’d composed in his head; the rest of us could imagine the words. Nobody knew but me that his story wasn’t living on the page. Over the course of the year, he was able to accomplish more and more but I really believe that the impetus for his growth was his sense that he was a writer because of his successful participation in the writing workshop share. Other students went to him for ideas; his ability to play with language in his head made him a great resource for other writers trying to work through challenges of plot of character. Valued by his peers, his confidence grew, and little by little, his personal writing began to evolve.

Just yesterday in my after school writing club where the share goes at least thirty minutes, the students blew me away again when they started to make text to text connections between students’ current writing and stories that were written in the past: “That part reminded me of Lucas’s ‘Magic Notebook’ story…you wrote about orphans last year but you’ve grown your idea…wow, ‘The Tooth Bully’ is sort of like that story you wrote about Mr. and Mrs. Meatball, but so much better!” They could recall details about work that had been shared a year ago or more with absolute clarity; the power of the student mentor text was completely validated in their conversation.

To battle time and make the share sacred, I had to deeply ponder this question: What is writing really? I still don’t have an exact answer but perhaps it’s the power to tell our personal narratives, to share our spin on the world, to communicate with and entice others with words. I believe we all have stories to tell and the breath of the writing workshop share gives life to story through the power of voice. Do I skip it anymore? Nope.

6 thoughts on “The Hidden Gifts of the Writing Workshop Share”